Mediality and Materiality of Contemporary Comics

Workshop of the Comics Studies Working Group in the German Society of Media Studies at the Graduate Academy of the University of Tuebingen, Germany

The Workshop „Mediality and Materiality of Contemporary Comics“ examines the relation between the mediality and the materiality of comics, particularly focusing on how this relation has changed in the context of digitalization and an increasingly convergent media culture. To this end, we warmly invite proposals for 20-minute papers to be presented alongside a number of more extensive keynote addresses. MA and PhD students working in the field of comics studies are explicitly encouraged to apply.

*Possible topics* for 20-minute papers include (but are not limited to):

Please send an abstract of 200 words and a 100-word bio via email (as a PDF or Word-Document) to
contemporarycomics@graduiertenakademie.uni-tuebingen.de no later than March 15, 2015.

Schlagwörter:2015AG-PanelcfpGfMGfM-JahrestagungMediality and Materiality of Contemporary Comics 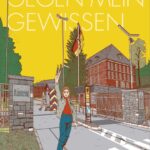