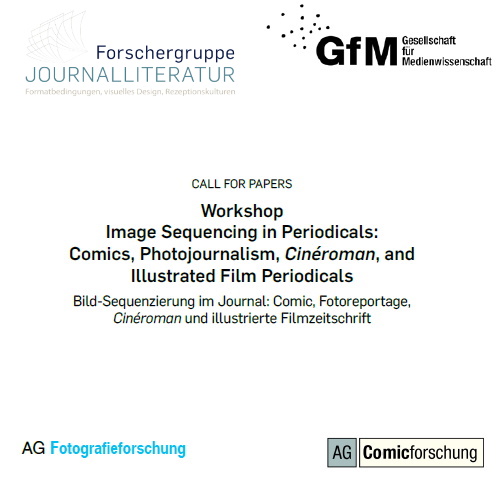 Due to the Corona pandemic, the workshop is postponed to the winter 2021/22.

300-word proposals due by: 31 January 2020 (imagesequencing-workshop@ruhr-uni-bochum.de) => Call for Papers

The premise of the workshop is that periodicals, as soon as they are capable of incorporating pictures, are prone to display not only single isolated, but most often multiple pictures and, moreover, arrange them in typical, possibly media-specific ways. The object of the workshop is to explore page layout strategies used in periodicals from the 19th to the 21st century in order to identify their manifestations, historical modifications and adaptations to different visual media.

From the late 19th century onwards photographic images have been published frequently in periodicals. As the 19th century drew to a close, photo-reproduction processes quickly supplanted wood-engraving. Photo-mechanical technologies such as the half-tone screen enabled mass reproduction of photographs. The importance of photojournalism and, accordingly, of photographic magazines such as the Berliner Illustrirte Zeitung was increasing, leading to the formation of the influential journalistic genre of the ‘photo reportage’. American comic strips explored novel ways of “juxtapos[ing] pictorial and other images in deliberate sequence, intended to convey information and/or to produce an aesthetic response in the viewer”, as Scott McCloud famously defined. Serial novels such as Georges Rodenbach’s Bruges-la-Morte (1892) were published AG Fotografieforschung accompanied by numerous photographs. After the turn of the century, the ever more popular medium of film found in the pages of the periodicals an ideal partner to transform its moving pictures into a fixed printed form. Throughout the 20th century these forms continued to flourish and develop, introducing new modes of serial picture display like the photonovel or the cinéroman up to current projects such as the Revue dessiné, offering a news magazine relying solely on comics. All of these forms raise the question how sequencing pictures on a page—and on ensuing pages—does produce meaning: How do still pictures narrate and produce visual discourse?

The workshop seeks to advance the study of image sequences from a transmedial perspective. The focus lies hereby on the way in which the medial format of the periodical operates with image sequences: How are images arranged and connected to each other, how do they produce coherence, the impression of a succession and very often even narrative cohesion? We welcome theoretical approaches as well as studies that work with historical or contemporary material.

Possible topics and case studies include but are not limited to:

We look forward to your submissions.