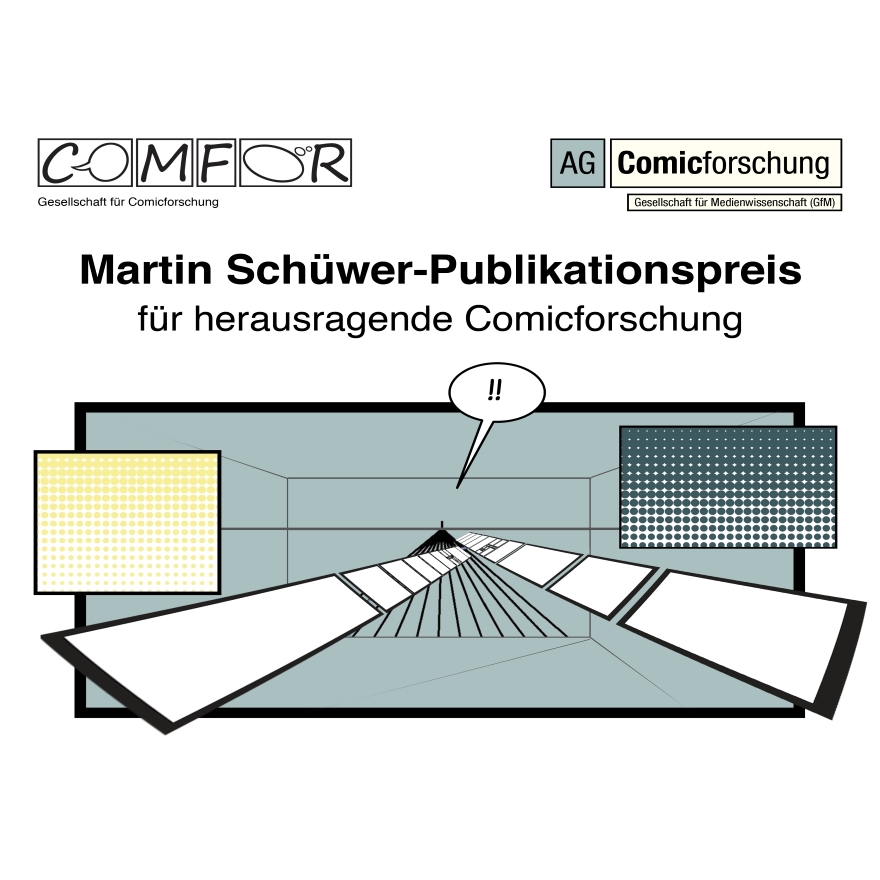 Announcement of the Winner of the Martin Schüwer Publication Award 2022

Felipe Gómez ist Teaching Professor of Hispanic Studies at the Modern Languages Department of Carnegie Mellon University in Pittsburgh, Pennsylvania. His award paper is titled “Would It Be Possible? Apocalypse and Emancipation in Latin American Graphic Novels”. It has been published 2021 in the journal Paradoxa (special issue “Comics and/or Graphic Novels”).

The Martin Schüwer Prize is awarded annually by the Society for Comics Studies (ComFor) and the Committee for Comics Studies at the German Society for Media Studies (GfM). The award promotes the work of emerging scholars, i.e., researchers who, regardless of their actual age, do not yet hold a permanent academic position as tenured faculty. It aims to create more visibility for comics-related research, in order to promote and communicate its importance to a wider public.

English submissions have been welcomed from the outset to facilitate international submissions and to acknowledge the fact that more and more researchers in this discipline are publishing in English, regardless of their native language, to ensure that their research can reach a broader audience in the international Comics Studies community. At the same time, this linguistic openness reflects the academic ideals of Martin Schüwer, a scholar of English Literature and Culture who specialized in comics studies and who died at a far too early age in 2013. Both Felipe Gómez’ submission and his continued efforts highlight that he is deeply committed, just as Martin Schüwer was, to further developing the field of Comics Studies ‒ which was another reason for us, the jury, to award this prize to Felipe Gomez.

His most recent research project is dedicated to the manifestations of resilience and perseverance in Latin-American comics that feature apocalyptic settings. He puts emphasis on the analysis of the aspects of race and gender which are reflected in the community and its protagonists’ survival strategies. His paper “Would it be possible? Apocalypse and Resistance in Latin American Graphic Novel” is an important addition to contemporary research on apocalypses and post-apocalypses. His focus, however, is on a subject that has been marginalized and underrepresented in more than one way: First, Latin-American comics, which are front and center here, are much less represented in international research than comic traditions of the northern hemisphere. Second, the research on the genre of science fiction, to which (post)apocalyptic scenarios belong, has focused on Eurocentric perspectives for a very long time. Only recently has research on science fiction in the southern hemisphere gained momentum. In this context, hegemonial narratives are exposed, and marginalized perspectives revealed. Dr Felipe Goméz’ award-winning paper makes a crucial contribution to the broadening of research perspectives.

Based on comics from Argentina and Mexico published between 1957 and 2014, the paper analyses how (post-)apocalyptic scenarios are employed to renegotiate social orders. By means of narratives of world collapse, these scenarios critically examine fundamental ideas of modernity, civilization, and progress as well as concepts of nationality and identity. Urban space plays a central role as a topos of progress, but also of collapse and decay. Dr Felipe Gómez’ paper also proves to be extraordinarily profitable on a topological level: most apocalyptic fictions on ‘the modern city’ usually revolve around the cities of the Western world.

Dr Felipe Gómez’ paper works against and beyond this hegemonial narrative: in his first example, the highly renowned Argentinian comic El Eternauta, the metropolis Buenos Aires is the setting of an apocalyptic scenario. He further refers to two other Argentinian and Mexican comics to illustrate ‒ from the “periphery” of the so-called Western discourse ‒ how the downfall of urban communities in the wake of a catastrophe correlates with post-capitalistic and post-colonial narratives. In doing so, he not only highlights the reference to a hegemonial narrative of the apocalypse, but also refers to specific Latin-American themes with a colonial historical tradition, such as the opposition between civilization and barbarism, or the protection of indigenous knowledge and beliefs. The result is a trans-national and trans-historical comparison, which is (still) rare in Comic Studies. Dr Felipe Gómez’ paper is a positive example of shifts and expansions of our fields of interest which we sorely need.

As mentioned before, we also award the prize for Dr Felipe Gomez’ academic commitment. As Teaching Professor, he has rendered outstanding service to teaching Latin American comics. In 2018, he received multiple awards for his innovative teaching (Carnegie Mellon University’s Teaching Innovation Award, Provost’s Inclusive Teaching Fellowship, Mejor iniciativa formativa desarrollada durante el año 2018 of the Premios Humanidades Digitales Hispánicas). He designed and implemented courses in which students learn how to use digital resources for their research, such as the Latin American Comics Archive, which has been established by Gómez.

Any person who has ever created, developed, or contributed to a digital archive knows how much time and effort is needed for this unrewarding and sometimes unrecognized service to the research community. The creation of such an archive is always an investment in the future of a discipline and in future research projects. In this sense, this year’s Martin Schüwer Prize does not only honour Dr Felipe Gómez’ analysis of apocalyptic scenarios in comics. We also award him this prize to acknowledge his commitment to the future of Comics Studies and as an encouragement to proceed with this commitment. In the understanding of the jury, awards can both recognize work that has already been accomplished and represent an investment in future projects.

We are delighted to congratulate Dr Felipe Gómez on being named the fourth recipient of the Martin Schüwer Prize!

The jury of the Martin Schüwer Prize 2022: